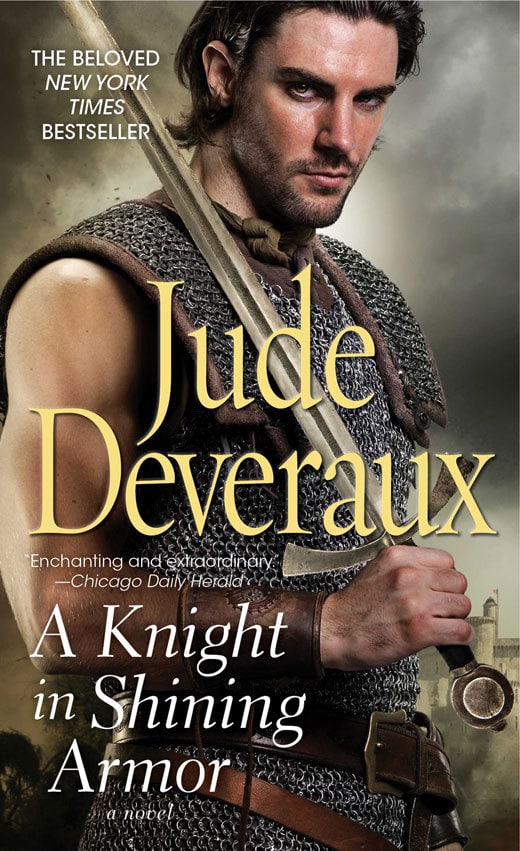 A Knight in Shining Armor

New York Times bestselling author Jude Deveraux will capture your heart with signature classic novel, a time-travel romance featuring a present-day heroine and a dashing hero from the sixteenth century!

Abandoned by a cruel fate, lovely Dougless Montgomery lies weeping upon a cold tombstone in an English church. Suddenly, the most extraordinary man appears. It is Nicholas Stafford, Earl of Thornwyck…and according to his tombstone he died in 1564.

Drawn to his side by a bond so sudden and compelling it overshadows reason, Dougless knows that Nicholas is nothing less than a miracle: a man who does not seek to change her, who finds her perfect, fascinating, just as she is. What Dougless never imagined was how strong the chains are that tie them to the past…or the grand adventure that lay before them.

Hailed worldwide as one of the most romantic novels of all time, A Knight in Shining Armor is “a glorious love story that spans centuries, worlds, and souls. It is the epitome of every woman’s fantasy” (Chicago Daily Herald).

A Knight in Shining Armor

Dougless Montgomery sat in the backseat of the rental car, Robert and his pudgy thirteen-year-old daughter, Gloria, in the front. As usual, Gloria was eating. Dougless shifted her slim legs to try to make herself more comfortable around Gloria’s luggage. There were six large pieces of matched leather luggage to hold Gloria’s belongings, and since they wouldn’t fit in the trunk of the little car, they were piled in the back with Dougless. There was a makeup case under her feet and a big wardrobe on the seat beside her. Every time she moved, she scraped against a buckle, a welt, or a handle. Right now, she had an itch under her left knee, but she couldn’t reach it.

Dougless clenched her fists, closed her eyes, and counted to ten. She. Gloria never said Dougless’s name, but just called her She.

Robert glanced over his shoulder at Dougless. “Dougless, could you please be a bit more careful? That luggage is quite expensive.”

“I am aware of that,” Dougless said, trying to keep the anger out of her voice. “It’s just that I’m having a difficult time sitting back here. There isn’t much room.”

Robert gave a great sigh of weariness. “Dougless, do you have to complain about everything? Can’t you even allow a vacation to be pleasant? All I asked was that you make an effort.”

Dougless opened her mouth to reply but closed it. She didn’t want to start another argument. Besides, she knew that it would do no good. So, instead of replying, she swallowed her anger—then rubbed her stomach. It was hurting again. She wanted to ask Robert to stop to get something to drink so she could take one of the tranquilizers the doctor had prescribed for her nervous stomach. “Keep this up and you’ll give yourself an ulcer,” the doctor had warned her. But Dougless wouldn’t give Gloria the satisfaction of knowing that she’d yet again managed to upset Dougless and to, yet again, drive a wedge between Dougless and Robert.

But when Dougless glanced up, she saw Gloria smirking at her in the makeup mirror on the sun visor. With determination, Dougless looked away and tried to concentrate on the beauty of the English countryside.

Outside the car window she saw green fields, old stone fences, cows and more cows, picturesque little houses, magnificent mansions, and . . . and Gloria, she thought. Dougless seemed to see Gloria everywhere. Robert kept saying, “She’s just a child and her daddy has left her. It’s only natural that she’s going to have some hostility toward you. But please try to show some sympathy for her, will you? She’s really a sweet kid when you get to know her.”

A sweet kid, Dougless thought as she looked out the window. At thirteen, Gloria wore more makeup than Dougless did at twenty-six—and Gloria spent hours in the hotel bathroom applying it. Gloria sat in the front of the car. “She’s just a kid and it’s her first trip to England,” Robert said. “And you’ve been to England before, so why not be generous?” That Dougless was supposed to read the road map when she could hardly see around Gloria’s head didn’t seem to count for much.

Dougless had tried to like Gloria. She’d tried hard to be an adult and ignore, and even understand, Gloria’s hostility, but it was more than Dougless could do. In the year she and Robert had been living together, Dougless had made every possible effort to find that “sweet kid” that Robert had told her of. Several times, she’d taken Gloria shopping and spent more money on Gloria than Dougless’s small elementary school teacher’s salary allowed her to spend on herself. Several Saturday nights Dougless had stayed at the house she shared with Robert, babysitting Gloria while he went to professional functions, usually cocktail parties or dinners. When Dougless had said she’d like to attend with him, Robert had said, “But time alone is what you two need. You need to get to know each other. And, remember, babe, I’m a package deal. Love me, love my kid.”

Sometimes Dougless had started to believe that it was beginning to work because she and Gloria were cordial, even friendly, to each other when they were alone. But the minute Robert appeared, Gloria changed into a whining, lying brat. She sat on Robert’s lap, all five foot two inches, one hundred and forty pounds of her, and wailed that She had been “awfully mean” to her.

At first Dougless had laughed at what Gloria was saying. How absurd to think she would ever harm a child! Anyone could see that the girl was just trying to get her father’s attention.

But to Dougless’s utter disbelief, Robert believed every word his daughter said. He didn’t accuse Dougless. No, instead, he just asked her to be a “little kinder” to “the poor kid.” Immediately, Dougless’s defenses had gone up. “Is that supposed to mean you don’t think I’m a kind person? You do think I would mistreat a child?”

“I’m just asking you to be the adult and have a little patience and understanding, that’s all.”

When Dougless asked what he meant by that, Robert had thrown up his hands and said that he couldn’t talk to her, then he’d walked out of the room. Dougless had taken two of her stomach tranquilizers.

After the arguments, Dougless had wavered between guilt and rage. She had a classroom of children who adored her, yet Gloria seemed to hate her. Was Dougless jealous? Was she somehow unconsciously letting this child know she didn’t want to share Robert with his own daughter? Every time Dougless thought of her possible jealousy she vowed to try harder to make Gloria like her, which usually meant she bought Gloria another expensive gift. And she’d again agree to babysit on the weekends when Gloria stayed with them. While Gloria’s mother had a life, Dougless thought with bitterness.

At other times, all Dougless felt was rage. Couldn’t Robert just once—one time—take Dougless’s side? Couldn’t he tell Gloria that Dougless’s comfort was more important than the blasted suitcases? Or maybe he could tell Gloria that Dougless had a name and wasn’t always to be referred to as she or her? But every time Dougless said something like that to Robert, she ended up apologizing. Robert said, “My God, Dougless, you’re the adult. And I only see her on alternate weekends, so of course I’m going to favor her over you. You and I are together every day, so why can’t you stand to play second fiddle now and then?”

His words sounded right, but at the same time, Dougless fantasized about Robert telling his daughter to “be more respectful” toward the “woman I love.”

“Rare and simply delightful…poignant, sensual….This unique story will capture your heart, make you laugh, cry, and wish this could come true.”

“A glorious love story that spans centuries, worlds, and souls…. A Knight In Shining Armor will capture your heart—and hold it.”

“A well-plotted book with a very attractive hero and a lot of charm.”