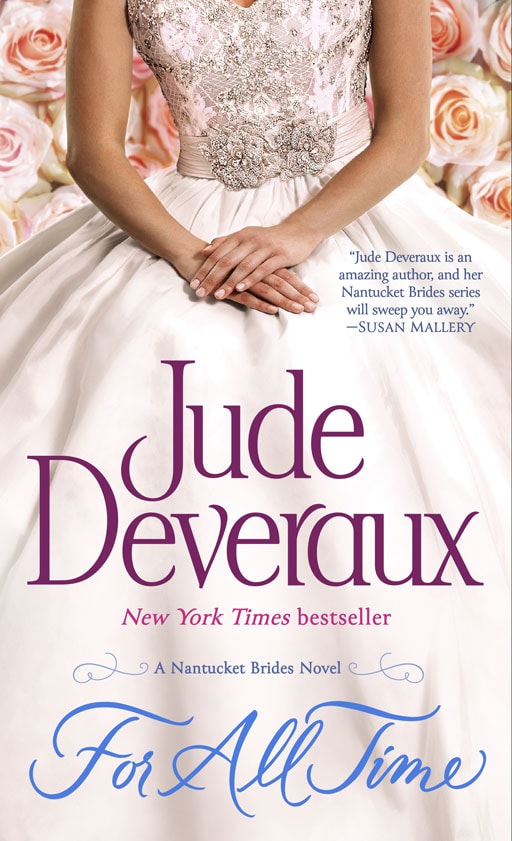 Jude Deveraux returns to the magnificent, sunny island in For All Time, the second novel in her Nantucket Brides trilogy—this time featuring the next generation of her beloved family of Montgomery-Taggerts.

The wedding of Alix Madsen and Jared Montgomery is a glorious affair at an elegant little chapel in the woods, followed by dinner and dancing, all while moonlight blankets the festivities in a romantic glow. While most guests are fixed on the happy couple, Jared’s cousin Graydon can’t look away from a bridesmaid, Toby Wyndam. It’s not just her quiet beauty that enthralls him or the way she makes him laugh. Toby possesses the truly remarkable ability of being able to distinguish Graydon from his identical twin brother, Rory. According to family legend, such a gift marks her as Graydon’s True Love.

But Graydon knows there is no possible way that they can ever be together, for he is heir to the Lanconian throne and is to marry a noble woman who has been chosen for him. Yet, intrigued by Toby, he asks her to help him hide on Nantucket for a week away from regal responsibilities. In exchange, he’ll assist her with planning acclaimed novelist Victoria Madsen’s lavish wedding. Since they both know their union is impossible, the pair promises that they will never be more than just friends.

But there’s more going on between Graydon and Toby than her unique power to tell him apart from his twin. At work are forces beyond their control, which are ruled by time itself. Combine that with the magical island of Nantucket, and a seductive spell is cast over Graydon and Toby. If they are to be together, they must change what once was, as well as what will be.

Graydon Montgomery couldn’t take his eyes off the young woman. The bride and his cousin Jared, the groom, were standing at the front of the little chapel, the pastor between them, and Graydon kept looking across them at her. She had on a blue bridesmaid dress, was holding a bouquet of flowers, and her attention was fully on the ceremony.

While she was pretty, she wasn’t conventionally so. She wasn’t the type of woman who’d make people do double takes. With her oval face, eyes the color of bluebells, and flawless skin, she looked like a girl you’d see in the newspaper as having attended a debutante ball. She’d be able to wear pearls and long gloves without looking like she’d rather be in jeans.

Earlier, when the four wedding attendants had been waiting outside, there’d been a lot of commotion inside the little chapel. At the last minute, some kind of mix-­up had caused a great deal of chaos. In normal circumstances, Graydon would have made an effort to find out what was happening, but not today. Today he was distracted by her.

Sounds of angry shouts and furniture crashing to the floor had come from inside the chapel. The two bridesmaids and the other groomsman went to the door to see what was going on, but Graydon stood where he was. He wasn’t even curious. All he could do was gaze at the back of the young woman. She had long blonde hair that curled down her back, and a nice figure. Not flashy, but trim and subdued.

Through all the turmoil, Graydon had stood back from them. He was only vaguely aware of the surroundings, of the big tent that was set up for dinner and dancing, of the moonlight on the wooded area around them, even of the brightly lit chapel where the wedding was to be. He seemed only able to think about what the young woman had said to him just minutes before.

When Graydon had been asked to escort a bridesmaid down the aisle, he’d thought it would be an easy, enjoyable task. After all, he was certainly used to red carpets and ceremonies of all kinds.

But when he was introduced to the young woman, he’d been shocked by what she said—­and he still hadn’t recovered.

When the noise inside the chapel finally calmed down and they prepared to go inside, Graydon moved to stand beside her and crooked his arm for her to take. When she put her hand on his arm, he smiled warmly at her, slipped his hand over hers, and clasped it gently.

Without a word, she snatched her hand away, took two steps back, and glared at him. There was no mistaking her meaning: He was to make no overtures of any kind toward her. And that seemed to include even friendliness.

Graydon didn’t think he’d ever before been at a loss for words, but in the face of her anger, every language he knew seemed to disappear from his mind. All he could do was stand there and blink. Finally, he managed to nod his agreement. No touching, no smiles, no anything outside what was necessary to get the job done.

As they walked down the aisle together, she kept her distance from him. Her hand was on his arm, but her body was two feet away from his. Graydon held his head high, doing his best to swallow his pride. Never before had a woman found him . . . well, repulsive. Truthfully, no woman had ever before tried to get away from him.

He wasn’t naive—­he knew well that a lot of the fawning and flirting directed his way was because of what he’d come to think of as the “unfortunate circumstances of my birth,” but still . . . That she didn’t want anything to do with him wounded his ego.

When they got to the front of the chapel, she seemed relieved to get away from him. She went to the left, and Graydon went to the other side to wait for the bride to come down the aisle with her father.

Throughout the ceremony Graydon couldn’t help peering around the bride and groom to look at her. What was her name? Toby, wasn’t it? Surely that was a nickname, and he wondered what her birth name was.

As the ceremony neared the end, Graydon felt that old familiar pull, what people called the “twin bond,” and he knew his brother was there. He glanced to his left, through the crowd of people packed into the chapel. Family was in chairs but the back was full of guests standing and watching. It took Graydon only seconds to find his brother in the very back, purposely hidden behind other people. Rory wasn’t dressed properly for a wedding, but then his leather jacket and casual slacks fit in with the American style. At least his brother didn’t have on jeans.

Rory nodded toward the blonde bridesmaid in question. He’d never seen his brother stare at a woman before and he was curious as to why.

As was sometimes the case with identical twins, he and his brother often communicated without words. But there was no way Graydon could tell his brother the one and only thought in his mind: She can tell you and me apart.

Frowning, Rory let Graydon know that he didn’t understand. He slanted his head to one side and Graydon nodded. They had just arranged to meet outside as soon as possible.

That done, Graydon gave his attention back to the young woman. In a moment they’d again walk down the aisle, and he looked forward to it.

Jude’s Look Behind the Story

View photos that inspired Jude while writing the book.

View outlines and other notes that Jude made while writing the book.

See Facebook posts that Jude made about writing the book.

Jude Deveraux is an amazing author, and her Nantucket Brides series will sweep you away.”

“Jude Deveraux takes us to a place where dreams are made. . . . For All Time is a page-turning time-travel romance that captures your imagination from the start and keeps hold till the very last page.”

“A beautifully written story with a refreshing old-romance feel . . . Fans of Deveraux will be delighted, while new readers will fall in love with her signature writing style.”